To bring in multiple perspectives on a Three Horizon Map to enrich understanding and inform possibilities of “convening the future” to take action.

As a second stage of building Three Horizons Mapping, especially useful if the team is all from one organisation and needs to broaden their perception and understanding of the dynamics that will shape H3 and how they might need to relate to other actors to bring about desired transformation.

Each actor perspective requires the set up for the whole group, or break out group, described in Three Horizons Mapping. 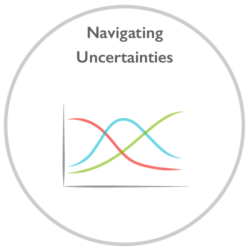